The April issue of Revista Española de Defensa in its English version dedicates its cover to the strengthening of the deterrence and defense measures that NATO has adopted as a result of the invasion of Ukraine. The Atlantic Alliance and the European Union have shown their unity and strength in condemning Russia, and their solidarity and support for Ukrainian people.

It also reports on the handover ceremony to the new head of the United Nations Interim Force in Lebanon (UNIFIL), Spanish General Aroldo Lázaro Sáenz. In an interview, he assures that, thanks to this peace mission, "a generation has grown up in a calm situation."

The pages of the National section include the collaboration of the Armed Forces in vaccinating citizens against COVID-19 within the framework of  Baluarte Mission, and support for the population affected by the eruption of the volcano in La Palma.

The magazine offers an interview with Lieutenant General Fernando García-Vaquero, head of NATO's Rapid Deployment Headquarters in Bétera. In addition, the keys to the new Strategic Concept that NATO must adopt at the June summit in Madrid are analyzed, together with another article focused into the role that the OSCE must play in conflicts.

The section dedicated to the defense industry reports on the arrival of the first CH-47 Chinook helicopter of the Army, that has been renovated in the US. A researcher from the INTA Astrobiology Center writes about the Spanish participation in James Webb Space Telescope. The April issue is completed with an analysis of the implications of climate change on the environment, the economy and national and international security. 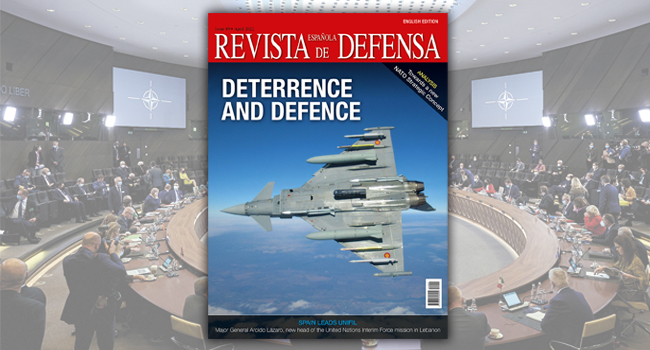