Predator, the new reconnaissance capacity of the Spanish Air Force

The tests carried out by the Air Force to tune up its new MQ-9 Predator Remotely Manned Air System (RPAS) at the Talavera la Real air base (Badajoz) and the participation of the Armed Forces in the Mission Baluarte, in support of the autonomous communities against the COVID-19 pandemic, are the cover themes of number 5 of the English edition of the Revista Española de Defensa.

Its inside pages include an interview with the Commander of the Operations Command, Lieutenant General Francisco Braco, and they pay special attention to the 20th anniversary of United Nations Resolution 1325, which defends the participation of women in the prevention, management and solution of conflicts.

The magazine remembers the role that Spain played 15 years ago in helping the victims of the earthquake in Pakistan, the first NATO humanitarian mission outside its area of operations. In addition, there are articles on the tenth anniversary of the NATO Center for the Fight Against Improvised Explosive Devices, located in Madrid; the aircrew rescue course of the Tactical Operations Leadership Program (TLP) and the preparation of the NATO Rapid Deployment Headquarters in Bétera (Valencia) to assume command of a joint Alliance force. Likewise, the complex reality of Malí, where the recent coup has confirmed its political instability, the challenges facing the UN on its 75th anniversary and the worrying boom of disinformation in the times of COVID-19 are also analysed. 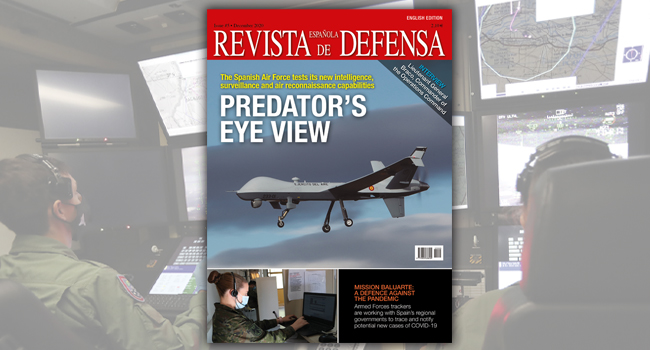