A new Alliance for a new era

The meeting of NATO´s heads of State and government in Brussels, in which it began a deep process of reforms that will culminate in the Madrid summit in 2022, is the cover story of number 8 of the English edition of Revista Española de Defensa. It also reports on the event in which the minister, the Chief of the Army Staff and the SEGENPOL (Secretary General for Defense Policy) analyzed the forty years of Spain's participation in the Alliance.

In addition, the operation to evacuate 2,206 people from Afghanistan and take in refugees in transit to other countries is reported. It also includes the visit of the Defense minister, Margarita Robles, to the contingent deployed in Lebanon, on the fifteenth anniversary of this mission.

The recent celebration in Madrid of the International Defense and Security Fair (FEINDEF 21), which brought together 20,000 professionals, and the agreement between Germany, France and Spain that covers the technological development and training phases of the Future European Combat Aircraft, are also addressed.

The reflection of the EU institutions on the need to increase its strategic autonomy following the lessons learned from Afghanistan is also the subject of attention in this issue.

General Carlos Salgado, chief of the General Staff of the Alliance mission in Iraq, and Lieutenant Colonel Bayardo Abós, who led the Baltic Air Police in Lithuania, are interviewed. 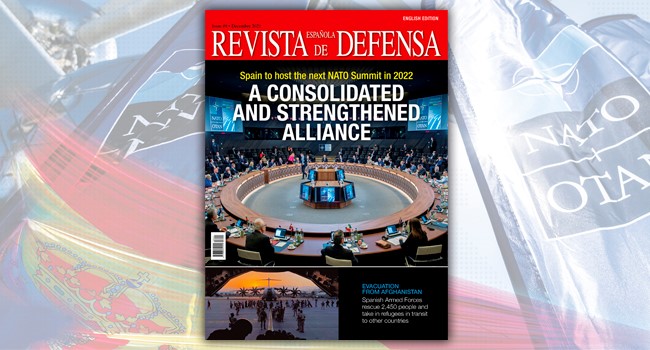