Spain's contribution to NATO missions is the cover theme of number 7 of the English edition of the Revista Española de Defensa. It reports on the participation of the allied forces of Operation Forward Reinforced Presence in three major exercises in the Baltic countries; and the collaboration of the Air Force in the NATO air police mission in Romania. It also includes the withdrawal of our last contingent in Afghanistan, which has put an end to almost twenty years of mission.

The magazine echoes the session in which the Minister of Defense, Margarita Robles, informed the Congress about the activity of international missions in 2020, which has continued in a very difficult year due to the pandemic. The minister writes an article, in which she reflects on the collaboration of the Armed Forces against the coronavirus.

The Joint Command of Cyberspace, which ensures the freedom of action of the Armed Forces in this new environment, is the subject of a report complemented by an interview with its chief, General Rafael García Hernández.

The launching of the S-81 Isaac Peral, chaired by the King in Cartagena, is also reported. With this one and the other submersibles of the S-80 series, the Navy will have the most advanced conventional (non-nuclear) submarines in the world. It also attends the presentation of FEINDEF 21, the second edition of the International Defense and Security Fair, scheduled for the month of November in Madrid. 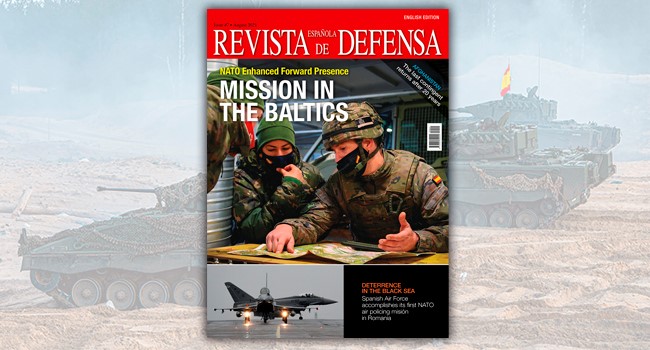