An interview with the Supreme Allied Commander in Europe (SACEUR) opens number 6 of the English version of the Revista Española de Defensa. General Tod D. Wolters says that "Solidarity and commitment are the key to NATO's success" and stresses that the Armed Forces of all the countries of the Atlantic Alliance "have responded to the complex situation caused by COVID-19”.

This April issue includes the appointment of Admiral General Teodoro López Calderón as the new Chief of Defence Staff. In addition, it is reported the deployment of Spanish fighters in the Black Sea to collaborate with the Romanian Air Force in the NATO´s air policing mission, an information that is completed with an interview with Lieutenant General Fernando de la Cruz Caravaca, CAOC Torrejón Commander.

The magazine includes a report on the SAR units of the 803 Air Force Squadron that have begun their transformation to the new NH90 helicopter, and another one on the presence of 20 Spanish soldiers in the Allied Ground Surveillance (AGS) System Force, in Sicily.

It also details how it will be the future submarine rescue ship hired by the Spanish Navy and reports on the participation of Spanish units in the Iron Wolf exercise, developed in Lithuania, to train the NATO High Availability Force.

The contents of this issue of the magazine are completed with an analysis of the Nuclear Non-Proliferation Treaty and the recent extension of New START. 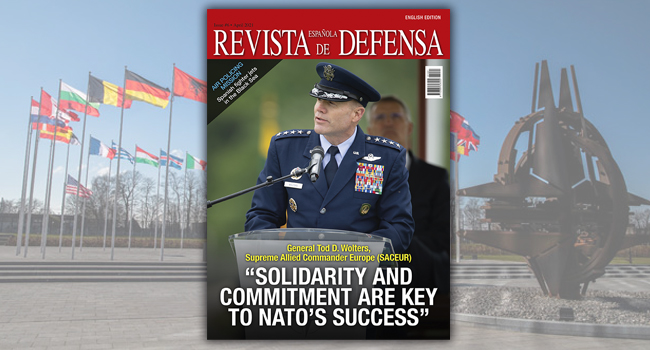